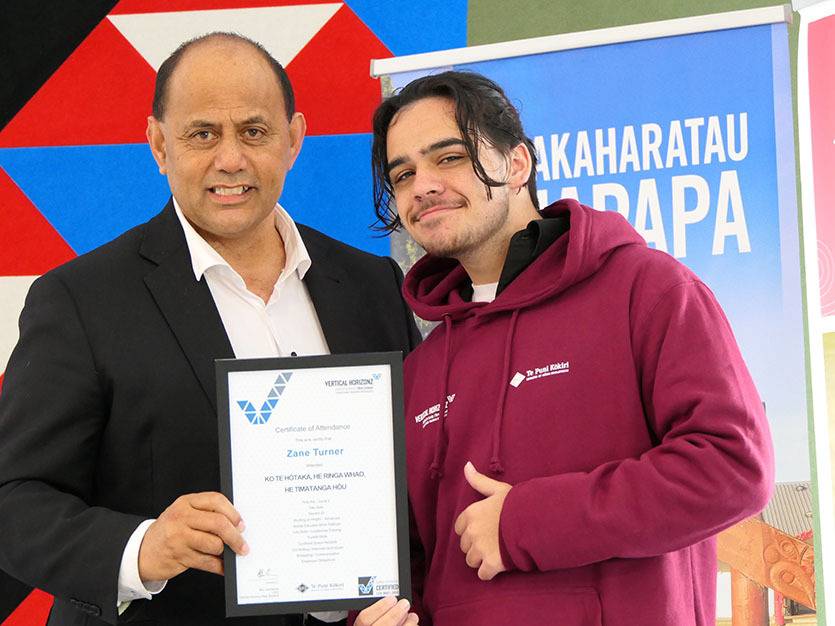 Caprice Turner (Aunty to one of our Train to Work Rangatahi, Zane Turner) spoke to us about her and her nephews’ experience with our Pae Aronui programme recently. The following story is an insight into where Zane has come from physically and emotionally, and the impact the programme has made on him and his whaunau following. A raw and heartwarming account of his progress, and we thank Caprice (and Zane) for sharing their incredible story.


"Firstly I’d like to give an insight into Zane's life as we witnessed, when we arrived home and how he came to be with us as this may give you a better understanding of how much this boy has achieved mentally, emotionally and physically.

My brother [Zane’s dad] raised his 3 young children on his own (as their mother was always in and out of jail). The children were his only reason for being, but unfortunately he became very ill. He was homeless for some time, unable to find a house for himself and his children to live in, so they stayed with his in-law's where he slept upstairs in the lounge room (12 stairs away from the nearest exit). The house was very dysfunctional, unhygienic, and full of negativity. Zane's younger sister often took her anger out on her brother and they became very distant. The family started to yell abuse and would curse frequently, and therefore Zane retreated further into his hole. As his father became more ill, he relied more on Zane to help manoeuvre him from place to place (ie. showering, changing, eating, toileting, medications etc).

My partner Gina and I returned home to Aotearoa to be with my dying brother. Throughout the month we only saw Zane for a few minutes here and there, while he snatched food then retreated back into his cave. Zane was a very shy and quiet boy who was easily missed if his name was never called, and his schooling was terribly interrupted. We further decided to get a house for us all to live in, so the kids could enjoy their last days with their dad and my brother could live his life out in his own home with his children. My brother and the children lived in the house we found, whilst Gina and I lived outside in the sleep-out. Zane became his fathers’ full time carer with us there to support and guide him, and we formed a beautiful bond together. When Zane's dad passed, we were to return to Australia to resume our travels in our motor-home which was in storage. However, Zane decided he did not want to live with his Mother, his father's partner or his uncle and came knocking on our door...We then had to decide what was best for Zane and ourselves.

I home schooled Zane while Gina worked to support us financially, Zane was very disconnected from society and adopted a severe case of anxiety. He had just lost his whole family, and even though it was dysfunctional it's all that he knew. Zane was very anti-social, as far as not being comfortable to eat with us at the kitchen table, and would face the wall with his back to us as he ate. He was uncomfortable eating in public or being around crowds, and the thought of being back in the school setting was terrifying for him. We decided Auckland was not the place for any of us to be so we had a unit built and moved back to our whenua in Raahuipokeka, where his dad and I were raised as young children. We slowly introduced Zane back into society and taught him life skills to manage his hygiene, culinary skills, social interaction, responsibility, confidence and accountability which helped build his self-esteem. Being back on our whenua and marae has been the best medicine for all of us and to watch him interact with his cousins, uncles and aunties was beautiful to witness. They all knew his dad and shared stories with Zane, which allowed him to call on all his special memories and ask questions that would help him though his mourning process.

When Koro and Kenia told me about Pae Aronui and what it offered, I was excited for Zane to attend. Although he was already involved in an employment training course elsewhere, I felt this was the one that he needed as it allowed him to expand himself, obtain some amazing credentials, land a good job and lay down some foundations for himself.


The first Five day noho scared him a little because he was not going to have aunties around and would be staying with strangers. When we picked him up after the noho he was full of smiles and couldn’t stop talking as he had so much to share (Zane rarely smiled nor shared anything with us or anyone else!). Zane met his older cousins and made new friends, not only with the rangatahi but with his mentors. He went on about Koro, how cool he was and the way he understood him, really understood him… like his dad did. Koro also knew Zane’s dad growing up, so that gave Zane a sense of comfort as not only was Koro whanau he was really cool whanau lol! Zane has never really had much interaction with girls (other than his 2 younger sisters, his younger cousins and his aunties) so this was also good for him to see that not all girls are nasty, and that respect goes along way.

The 10 day noho is where he really grew into himself, he discovered things about himself that he never knew he had. Zane is interacting with people his own age and understanding that his peers are not a threat but that they actually care for his well-being and his future success. He enjoyed the whanau day because it gave him insight into what aunties do for work at our night gigs (Karaoke entertainment) and that we really do have his best interest at heart. Zane's hygiene levels have dramatically improved, so much so that he now takes 2 showers a day! He stands tall with pride and significance, and he even asked if we have always been this short! Zane has never been comfortable hugging or kissing people, now every time we turn around, he is up in our face wanting a hug and he even kisses us good night!

Zane is proud of his achievements and now talks of his goals with truth and determination. He was very indecisive prior to the Pae Aronui course and didn’t have any direction. Nowadays Zane is asking so many questions and we can actually sit and talk openly, without judgement, for hours. Our conversations have meaning behind them. Pae Aronui has been a true blessing not only for Zane personally but for us on a whole as a whanau. Our village is noticing a huge shift in him, seeing how much he has grown into himself and now being more considerate towards others.

I would recommend strongly that this course be more publicised because so many families would benefit in so many ways, it breaks the disconnect and heals the wairua [soul] allowing the whole whanau to reconnect, for our future Rangatahi to engage and move forward into society with confidence from the knowledge they have gained, and the tohu to proudly display. Pae Aronui is game changing for our Rangatahi. From me and mine, we thank you all very much for bringing our young man into a space of love, and safety to learn with pride and acceptance!

PS. Zane has been working full time since October 2019 and has already had a pay rise. He has moved to Auckland to be closer to his mahi, and we are so very proud of him!"