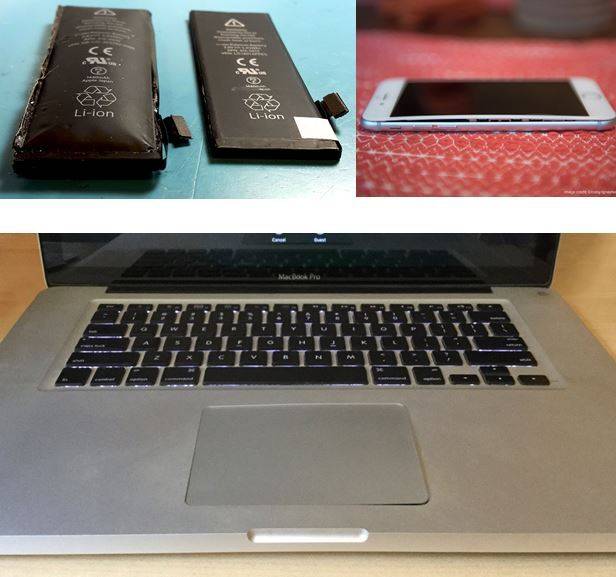 As we approach the warm summer months, a recent conversation with one of our team, regarding an over-charged / swollen mobile phone battery, reminded me of the risks associated with rechargeable batteries, and in particular lithium-ion (Li-ion) (but also older lithium-ion polymer (LiPo) batteries used in mobile phones and the like.

Note that this not only applies to mobile phones, but can affect any device using lithium-ion batteries, such as power tools, laptops, tablets, and even electric bikes and cars.

Lithium-ion batteries use a chemical reaction to generate power.

As the battery ages, this chemical reaction no longer completes perfectly, which can result in the creation of gas (called outgassing), leading to a swollen battery.

Additionally, if the battery’s internal layers do not maintain proper separation (due to damage or defect), outgassing, swelling, and even fire can occur.

If the membrane has been compromised, moisture in the air can react with the cell, causing the cell to swell.

This explosive reaction has infamously affected the Samsung Galaxy Note7 and hoverboards, resulting in the strict limitations placed on shipping batteries, as well as carrying them on airplanes.

WARNING: A SWOLLEN LITHIUM-ION BATTERY MAY CATCH FIRE OR EXPLODE.

If your device feels extremely hot, or smells awful, do not attempt to remove the battery. If your device is actively emitting smoke, clear the area around it.

If you cannot move the device, you can smother the fire with sand, an approved fire extinguisher, or cover it with a fireproof container, and then stand clear.

Water used to douse the battery can react with the lithium and cause a fire.

If you can safely move the device, put it in a fire-safe or well-ventilated area such as one with a concrete floor—and then stand clear until the battery is cool.

Once a battery catches fire, the reaction will continue until the fuel is exhausted.

How to take care of your battery.

Batteries are consumable, and no matter how well you take care of them, they will eventually need to be replaced. That said, below are some best practices to keep your battery healthy as long as you can. But, it is important to note that you cannot heal a swollen or defective battery; you can only remove it. These hints can only help prevent battery degradation.

Myth buster: Unlike NiCad batteries, lithium-ion batteries do not have a charge memory. That means deep-discharge cycles are not required. In fact, it's better for the battery to use partial-discharge cycles. However, it is recommended that after 30 charges (approx. once a month) the battery should be almost fully discharged and then recharged – avoid discharging the battery totally though.